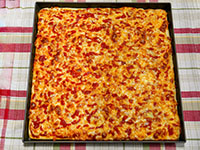 This is our version of a grandma-style pizza. Originally we based it on the recipe from King Arthur Baking. But after some experimentation, we decided that we prefer a crust that uses the same recipe as our Italian bread. We like our crust on the thinner side, so we’ve proportionally reduced the ingredients in the bread recipe to make the crust. We bake the pizza on rack 2 at 550°F for 6 minutes, turn the temperature down to 400°F and bake for another 5-6 minutes (watch carefully as depending on what cheeses were used, it may brown a bit more quickly sometimes.